To fully communicate the terrible reality and continuing legacy of the American war in Vietnam, one must have the courage to admit that the United States rained incredible violence on the Vietnamese people for no defensible cause, as it sought to replace France as the dominant power in Southeast Asia.

Ken Burns and Lynn Novick assert at the beginning that the war “was begun in good faith by decent people, out of fateful misunderstandings.” Even a cursory reading of the Pentagon Papers disclosed by Daniel Ellsberg demonstrates the falseness of this claim of American innocence.

The series pays scant attention to the millions of civilian deaths in Southeast Asia, the devastation of the land, and the enduring impact of Agent Orange contamination and of unexploded ordnance (10% of the 7 million tons of bombs dropped never exploded), all caused mainly by the American military.

Instead, Burns and Novick in The Vietnam War—while justifiably critical of American Presidents and military leaders—mainly focus on the harm visited upon U.S. soldiers who were ordered to fight in Vietnam. They reinvigorate Cold War myths that the Vietnamese anti-colonial struggle was carried on as an extension of Soviet/Chinese Communist expansion.

Instead of being honored for its accomplishments, the profound U.S. antiwar movement is belittled as self-interested and self-indulgent, with stress on its supposed deep antagonism toward American soldiers. The documentary does not put forth an honest moral critique of the war. Instead, the views of pro-war career professionals are put forward. Daniel Ellsberg is absent, while Martin Luther King’s opposition is sanitized by omitting his powerful words: “The shirtless and barefoot people of the land are rising up as never before. The people who sat in darkness have seen a great light. We in the West must support these revolutions.”

In this war-torn world, what is desperately needed and what Burns and Novick fail to convey is an honest rendering of that war to help the American people avoid yet more catastrophic wars. The Emmy Award is a powerful recognition of truth in art. Crowned with an Emmy, this defective history of the Vietnam era will become required viewing for generations of young Americans—a seductive, but false, interpretation of events.

As veterans who served during that time and during subsequent wars, and as civilians who actively oppose them today, we ask that these issues be seriously considered when voting for the “Best Documentary Series” this year. 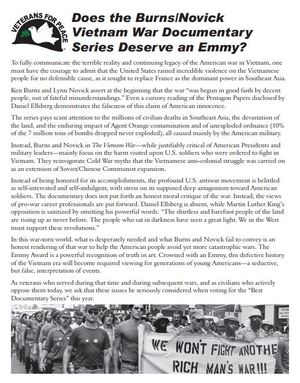 In the face of the attempted whitewashing of that war by the Pentagon, the Full Disclosure Campaign of Veterans For Peace is attempting to dissuade Hollywood from awarding the Burns/Novick an Emmy.  Veterans For Peace were not silent about speaking out about the Koch Brothers and Bank of America-funded The Vietnam War documentary series by Ken Burns and Lynn Novick.  Now with Burns and Novick’s misleading and less-than-honest documentary coming up for an Emmy, once more we are compelled to speak out.

A message from the Full Disclosure team:

We would like to run this as a full-page ad in Variety magazine. The ad will cost $7,400. Variety has a paid circulation of 54,000, with an estimated readership of 162,000.  For 113 years, influential producers, executives, talent and fans of the entertainment industry have turned to Variety for expert film, TV, digital, music, theater business analysis and insights.  An ad would have wide impact, especially when accompanied with news releases explaining VFP’s concerns with the documentary.  Plans are also in formation for a symposium, picketing and leafleting in conjunction with the Emmy award ceremony.

As the ad says, “The Emmy Award is a powerful recognition of truth in art. Crowned with an Emmy, this defective history of the Vietnam era will become required viewing for generations of young Americans—a seductive, but false, interpretation of events.”

Let’s make this ad happen. Those of us who produced the ad are chipping in $150 – $200 each. That’s not easy for some of us, but we care deeply about this. We hope some of you who may be more affluent and who also care deeply about the truth will donate more. But everybody can donate something and if everybody does, we will get the word out.

Please donate at this link

Veterans For Peace is a 501(c)3 organization. All contributions are tax deductible.